We both stood still. For a few minutes, we just stood there.

As the evening aarti at the temple was about to begin, we just stood there. Struck. In awe. In silence. At the entrance of this magnificent – no that’s not the right word for it but can’t think of anything else – temple.

This was no ordinary temple. This was something else. That something else which made us stop there, right at the entrance of it, could it have been only the externals? No, it can’t be. 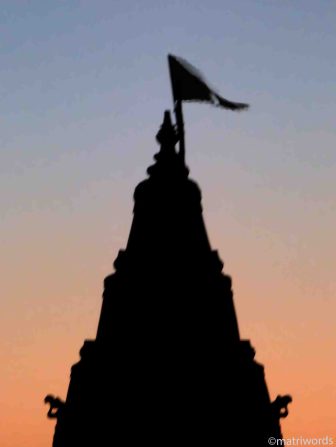 It’s not that the temple isn’t a grand one in its externals, though not like one of those Chola marvels or Hoysala beauties. But there was something so inwardly grand, so regally divine about it. Something so out-of-this-earth, indeed a heavenly structure brought down on earth.

The Jagat Mandir, or better known as Dwarkadhish temple, in Dwarka, Gujarat is the abode of Lord of Dwarka, Sri Krishna as Rajadhiraj. The temple’s history dates back to about 2500 years, and it is believed that it was Sri Krishna’s grandson Vajranabh who first got a temple built in memory of his divine ancestor.

The town of Dwarka is believed to have been submerged in the Arabian sea six times and the present town is the seventh reincarnation of the holy abode of Lord Dwarkadish. Known in India as one of the Moksha-dwar, gateway to Moskha (liberation), Dwarka, the city built by Sri Krishna and its legendary temple are considered as one of the four significant places of pilgrimage (char dham) for devout Hindus. Read more about the fascinating history of Dwarka here.

The magnificently and spell-binding five-storied Dwarkadish temple, in its present form, with its carved columns and two entrances – Moksha Dwar and Swarga Dwar – is built in Chalukyan style, constructed in 15-16th century. The Sun and Moon bearing mandir-dhwaja, the temple’s flag, is changed five times during the day. A brief historical timeline of the temple can be accessed here.

But all that is of scholarly interest.

My husband’s way of describing any such experience is through his camera. Because there is no photography allowed anywhere inside the premises of the temple, he had to content himself by taking a few shots from the outer complex near the security gates and from the main temple street.

Let me see if I can describe what I felt through words. It was this palpable feeling of recognition that this IS indeed the Lord’s place, the place from where while outwardly running the affairs of his kingdom he was always inwardly working and arranging to establish a reign of Dharma, to unify the disparate regions of Bharatvarsha under the one flag of Dharma-rajya. And with this recognition many stories from the Mahabharata came alive in front of the eyes.

What was also very palpable was that even though Dwarka is Sri Krishna’s karmabhoomi – and his field of karma was as grand and noble as the punyabhoomi of Bharat – there is also such an intense feeling of Joy, Ananda, that sweeps over you as soon as you enter the temple premises, the feeling that the Indian heart and mind have come to associate with Sri Krishna, his life and work.

The joy of anticipation of meeting the Lord in his regal shringar, befitting a king of kings.

The joy that is pouring through the beats of the dhol as the aarti begins.

The joy that unites all the bhaktas standing in the darshan queue in one universal embrace of the love for the Lord.

The joy that melts through the eyes when you are in front of the Lord, the joy that is beyond all description.

There is a lot more I could say about the very special Darshan we had at Dwarkadish temple. But there is a whole lot more that would still be left unsaid. Because it simply can’t be said. It has to be experienced.

All I can say is – thank you, Lord for blessing me with the experience. 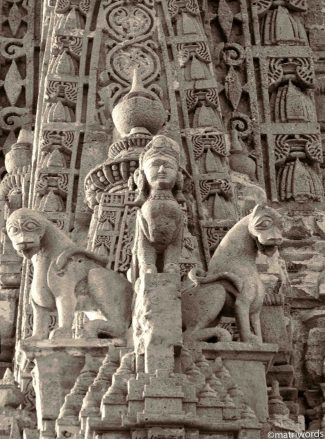 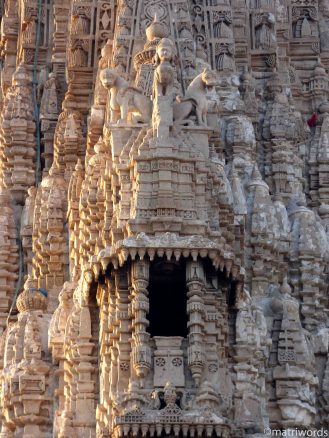 26 thoughts on “The Gateway”

A bit about me